Acclaim Raise the Bar on Isle of Wight Deliveries 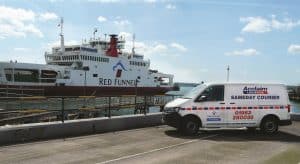 In a world where everything is instant and speed of service can be your competitive edge, same day deliveries have become a standard expectation for businesses and consumers on the mainland. However, for the Isle of Wight based business, trading across the Solent can be a costly and logistical nightmare.

Acclaim’s re-booted Isle of Wight delivery service promises to at last level the playing field, with same day freight crossings now offered as standard. Economy and next day deliveries remain available, but any goods received at Acclaim’s depots in Cowes or the Red Funnel Southampton terminal before mid-day will be shipped same day on the next available crossing.

Mark Robinson, Managing Director, said: “Working in partnership with Red Funnel Ferries, we run an hourly shuttle service between the Isle of Wight and Mainland, which puts Acclaim in the unique position of being able to provide a premium, express delivery service across the Solent, without the associated price tag.

The Isle of Wight is a hive of industry, including ship builders, pharmaceutical companies, manufacturers and retailers. For too long these businesses have had to accept longer delivery times, delays and lack of flexibility on shipments, forcing many to purchase their own vehicles to get the service they need. Our focus for the past 12 months has been to improve the link between the Island and the Mainland, without penalising the businesses that are based there with extortionate delivery costs. We believe same day deliveries should be standard, regardless of which side of the water you’re on and hope that this new service will raise the bar for Island shipments.”

With the controversial fixed link discussions offering no progress for the foreseeable future, improving the transport links between the Mainland and the Isle of Wight is a big step towards Island businesses achieving parity with their Mainland competitors. Since partnering with Red Funnel Ferries last year, Acclaim has seen a significant increase in Isle of Wight freight and invested in a number of new vehicles and employees to meet demand.

Acclaim Logistics has depots in Cowes and Southampton and has been operating for over 20 years. Acclaim’s Isle of Wight delivery service offers a free collection service for Island businesses shipping to the Mainland, covering the Island leg of the journey and ferry crossing free of charge. As members of the UK’s largest pallet network, Palletways, and biggest independent parcel network, APC, goods from the Isle of Wight can then be automatically fed into either network and efficiently forwarded to any UK or worldwide destination.

Back to Our News page